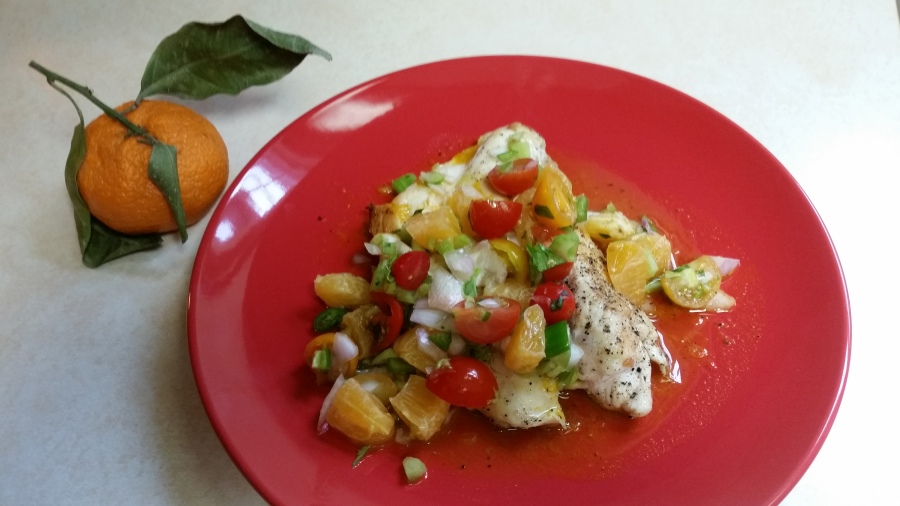 The sun is in abundance today, a promising start to 2017, and the resplendence carries beyond the skies.  Today’s dish, for example, brightens the palate and warms the spirit with a vibrant clementine salsa.  It’s  as flavorful and as effervescent as its colors are bold.

Imagine feeling a fresh clementine, and how the wonderful citrus fragrance fills the room.  Now contemplate that sublime, juicy first bite; one that’s as luscious as the brightest memories had dreamed after a year’s absence.

That’s what this salsa brings to the table, in more ways than one.  Every bite bursts with sunshine, helping one forget the calendar.  An instant tropical vacation.

This recipe  was featured in the December 2009 issue of Bon Appetit, and definitely inspires longing for each year’s all-too-brief clementine season.  When they’re used to create meals like this, the little citrus nearly makes one look forward to its return with next winter’s snow.  Nearly.

Mix the diced clementines with all the remaining ingredients except the olive oil and the clementine juice.  Let stand, covered,  at room temperature for up to two hours, to allow the flavors to incorporate.

Sprinkle the chicken with salt and pepper.  Heat the olive oil in a large skillet over medium-high heat.  Add the chicken and cook until it’s light golden-brown, about five minutes per side.  Remove the chicken to a separate plate while maintaining the heat beneath the skillet.

1 – If you attempt this dish outside the early-winter clementine season, tangerines would be a passable substitute, although they’d miss some of the vibrancy.  Plus, with tangerines, you have to take care to extract the seeds first.

For that matter, even regular navel oranges would work although, again, they won’t pack quite the same punch as clementines.

3 – Having forgotten to pick up cilantro at the market, I substituted a similar quantity of celery greens.  They filled in nicely.