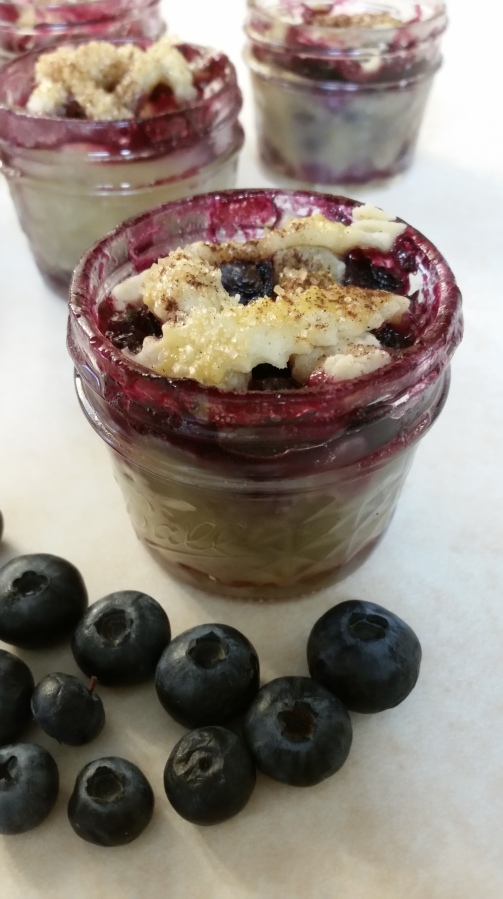 An inevitable part of making fruit pies, particularly berry varieties, is the dealing with the filling’s exuberance.  No matter the baker’s plans, no matter how carefully he tucks the crust, as soon the oven door shuts those berries just want to bubble over and cover everything.  Checking back twenty minutes later reveals a sweet, sticky (and glorious!) disaster.

Needless to say, the end product looks nothing like the pristine, perfect pastries featured in the internet’s recipe collections.  How do they do it?  Why are their berries so well behaved?  What sorcery was invoked?

These questions miss the point, though.  The familiar cliché advising that, “It’s what’s inside that matters” fits this case well.  No matter how sloppy these pies are, one bite makes appearances irrelevant.  It’s not just the berries’ perfectly balanced tangy-sweet juiciness that excites the palate; it’s the way their effervescence matches so well with the buttery, flaky crust.

The crust deserves special mention, as the recipe found on allrecipes is outstanding.  It’s the same recipe used for the apple pies I brought to the office Christmas party a few months ago.  Then, as now, my take was to add fresh clementine zest, which compliments a fruit pie particularly well.

As for the filling’s “secret ingredient”…

Have you noticed how often I add some form of alcohol to these recipes?  I’m not a lush, really!  It’s just that a splash of sherry here, a bit of brandy there, does make so many of these recipes sublime.  It’s all in moderation’s subtlety.

In this case, a quarter-cup of raspberry wine mixed with an equal amount of blueberry preserves deepens the fruits’ flavor, and definitely puts one in mind of  summer’s magnificent berry season, now just a whisper, but drawing closer with every day.

Come to think of it, some of the mess these pies created is my fault, as adding liquid to the filling definitely gave it additional incentive to pour out everywhere.  These blueberries had just a little wine, and look at the mess they made!

This isn’t the recipe’s fault – the instructions found on handmademood are spot-on – but it’s more like, “operator error.”  I had to add my own twist, didn’t I, and see what happened.  Still, I think the mess is worth it, as these pies turned out pretty well.  Those of you who will try them tomorrow might agree.

Cut the dough into 1/4-inch strips, then weave the strips into a lattice form, leaving a gap between the strips.  Use one of the jars’ rings to cut the lattice into circles; place one dough circle atop each jar, tucking in the edges.

Brush the lattice with beaten egg, then sprinkle with sanding sugar. (*6)

Bake in a 375-degree oven for twenty minutes, until the dough turns golden-brown.

1 – I used fresh blueberries, which may have mitigated some of the additional moisture the wine added.

2 – Because the wine-blueberry preserves mixture added sweetness, I reduced the sugar to 2/3 of a cup.

4 – If you want to add a distinctive touch, try making your own dough.  It’s so worth the relatively small effort you’ll make.  The recipe, as cited above, is here.

5 – As mentioned in the text, I also added a mixture of 1/4-cup each of raspberry wine and blueberry preserves.  Of course, I made a double recipe, so if you’re making a single recipe, reduce each measurement to 1/8-cup.  This addition provides a depth and intensity of flavor.

6 – Also, sprinkle a bit of cinnamon too; it’s a nice touch.