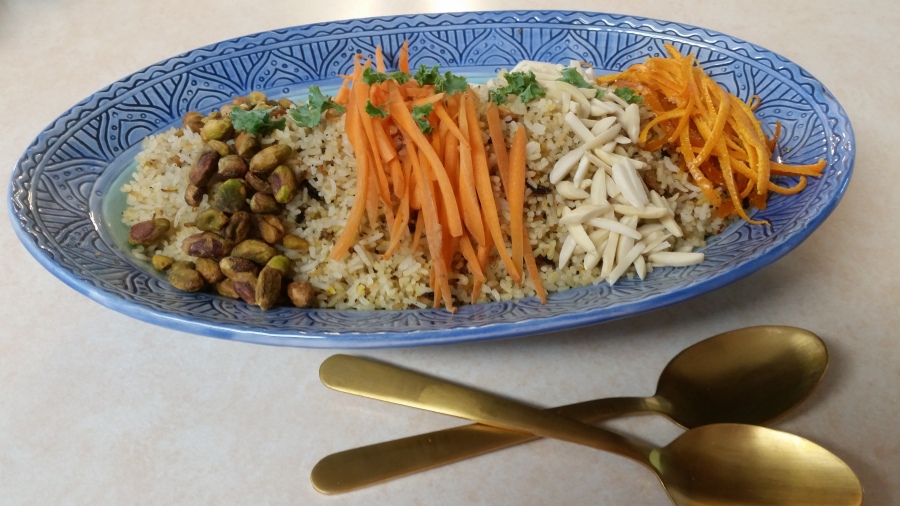 It’s what marks a successful Persian rice pilaf, the tah dig, or crust that forms beneath the rice as it cooks.  This requires careful attention to ensure the rice doesn’t overcook and the tah dig doesn’t burn to a blackened crisp.   Charcoal definitely isn’t good eats, to adapt one of Alton Brown’s favorite locutions.

Timed just right, though, the tah dig is golden, both literally and figuratively.  Its rich, deep flavor enlivens every bite.  It’s what Persian cooks (and, in my case, a non-Persian cook) hope to achieve.  A good tah dig imparts what the Japanese on Asia’s other end have labeled umami, that glorious savory element.

The March 2012 issue of Saveur featured this recipe for Shirin Polow, Persian Rice Pilaf.  Rice by itself is filling, but isn’t especially flavorful.  Prepared in the shirin polow method, however, the rice takes on all the flavors that adorn it – the almonds and pistachios are richly satisfying and the carrots and candied citrus hint at sweetness.  Above all, though, is the tah dig, crispy bits of concentrated goodness.

With all these tastes mixed in, the rice keeps taste buds busy.  Although we often think of rice pilaf as a side dish or at best as an opening act, shirin polow stands on its own.  The wealth of flavors makes this a completely rewarding meal; a feast, even.  Speaking from experience here…

It’s the tah dig.   Managed carefully, it’s a wonder, elevating rice from a filler to a meal.  And beyond, raising it to cuisine.

Rinse the rice in a fine mesh strainer until the water runs clear.  Place the rice in a large pot and add the salt and 4 cups of water.  Cover and set aside for two hours.

Meanwhile, in a saucepan bring to a boil the sugar, 1/2 teaspoon of the saffron and 1/2 cup of water.  Add two-thirds of the orange peel (i.e., about half a cup) and cook until tender, about ten minutes.  Remove from heat and after the mixture has cooled somewhat stir in the rose water.  Set aside.

After the rice has soaked for a couple hours, place the pot over high heat.  Boil for about ten minutes then drain the rice.  Return the drained rice to the pan and add the milk, remaining saffron and the oil.  Form the rice into a mound; using the handle of wooden spoon, poke five holes in the mound, to allow steam to escape.  Cover pan and cook over medium-high heat for 15 minutes.

Pour the butter and one cup of boiling water over the rice.  Cover and reduce heat to medium-low.  Cook for about 30 minutes, until a golden crust (the tah dig!) forms on the bottom.  Break the crust from the bottom of the pot and mix into the rice.  Transfer to a platter and garnish with the candied and remaining raw orange peel, the carrots, almonds and pistachios.

1 – As you probably know, saffron is infamously expensive – the tiny amount sufficient for this recipe cost me $24.  While omitting it would deprive the dish of a special flourish, you could continue without the saffron and still achieve satisfactory results.

2 – I used clementine peels.  What better way to use up the last of this year’s extraordinary California clementines?  They’re so much more vibrant than “regular” oranges, both in color and in flavor.  With the pith (the bitter white part underlying the skin) carefully scraped away, the clementines made a superb candied citrus peel.

3 – Unless you have access to a Near Eastern market, you probably will need to order rose water online, as I did.  If you skip this obviously time-consuming step, the citrus peels still will be wonderful, but they’ll lack a certain refinement.