As we begin counting the months and, soon enough, the weeks until next summer, local produce is but a happy memory.  For now.  Just as time’s steady progress has moved freshly harvested fruit to the past, so too will it return eventually.  However, as one of you has observed, we still have options, even now in late autumn.  One of our modern civilization’s wonders is that it produces vibrant citrus year-round.

Lemon’s exuberantly yellow brightness and its invigorating aroma so evoke brilliant sunshine it makes instant summer whenever it’s enjoyed.  So, when life, or at least the calendar,  gives you lemons you make…Lemon Cardamom Cookies!  This particular venture is an old Iraqi favorite often enjoyed with afternoon tea, and the recipe was featured in the January 2017 issue of Saveur.  My riff on the original, which is topped with icing and candied lemon peel, is to replace them with grated lemon zest and finishing sugar.

The cookie is made with a generous helping of butter, which creates a light, crumbly texture.  It’s quite reminiscent of shortbread, except with lemon’s sunny zing.  Then there’s the cardamom, a spice with a unique taste.  Slightly sweet with earthy tones and an almost herbal profile, cardamom plays an intriguing note just below the surface, and is a nice, and unexpected, compliment to the lemon.  The combination is quintessentially Near Eastern.

In the article accompanying the recipe, the author mentions that Lemon Cardamom Cookies were one of her late father’s favorites, as it reminded him of growing up in old Baghdad.  This was classic Iraq, before a tragic coup overthrew a friendly monarch and set the country on the path to Saddam Hussein and other recent unpleasantness.  Prior to that interruption Iraq was a country whose leaders had a happier, more optimistic view of the future.

(Above) King Faisal II, aboard the Queen Mary, arrives on a visit to New York and (Below) Iraqi stamps of the era. 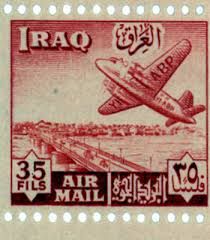 Of course, we’re not here to discuss culture, but cuisine, though the two often coincide.  In fact, it’s no surprise that a country at a more cheerful point in its history produced a  confection as sweetly sunny as Lemon Cardamom Cookies.  The color, the aroma and, above all, the taste just radiate sunshine.  A perfect treat for to vault us beyond December’s doorstep, don’t you think?

Preheat the oven to 300 degrees.  In a medium bowl, sift the flour, baking powder, cardamom and salt.

In a mixer, beat together the butter and the sugar for about a minute.  Add the lemon zest and vanilla and beat briefly.  Reduce the speed to low and add the dry ingredients a little at a time until incorporated.  (*3)

Remove the dough from the mixture and form it into a ball.  Divide the dough in half and place the first portion on a well-floured surface.  Roll out to a 1/4-inch thickness.  Cut into shapes desired (*4) and place on a parchment lined (*5) baking sheet.  Repeat with the second half of the dough. (*6)

Bake for 30 minutes, or until the cookies have a slightly brown tinge.

1 – Cardamom isn’t easy to find, so if it evades you, this recipe still would produce delightful results without it.  However, this would deprive the cookies of a certain intriguing taste element.

2 – I used 2 teaspoons of lemon zest, as it gave the cookies more “spirit.”

3 – Reducing the speed and adding the flour mixture a little at a time is absolutely necessary to avoid making a mess.  Keeping the mixer at a higher speed or adding the flour all at once would create an explosion, sending flour everywhere.  Not a fun thing to clean, trust me.

4 – I used two different-sized round glasses to create a crescent-moon shape.  It seems in keeping with the Near Eastern theme.

5 – Even better than parchment paper is a silicone baking mat.  These things are miraculous!

6 – At this point, just before baking, I added the turbinado sugar, then grated lemon zest over them as soon as they emerged from the oven.  If you’d prefer them with the glaze featured in the original recipe just let me know and I’ll provide those instructions.