While today’s Steak and Ale Pie is classic British pub fare, it’s wise to use the beer sparingly.  Though it is indispensable for this preparation, a half-pint of ale (slightly less, actually) is just enough to maintain a satisfying malty theme and to keep the filling from becoming too rich and heavy.   For more ale, see the picture below or, better yet, consult your favorite barkeep. 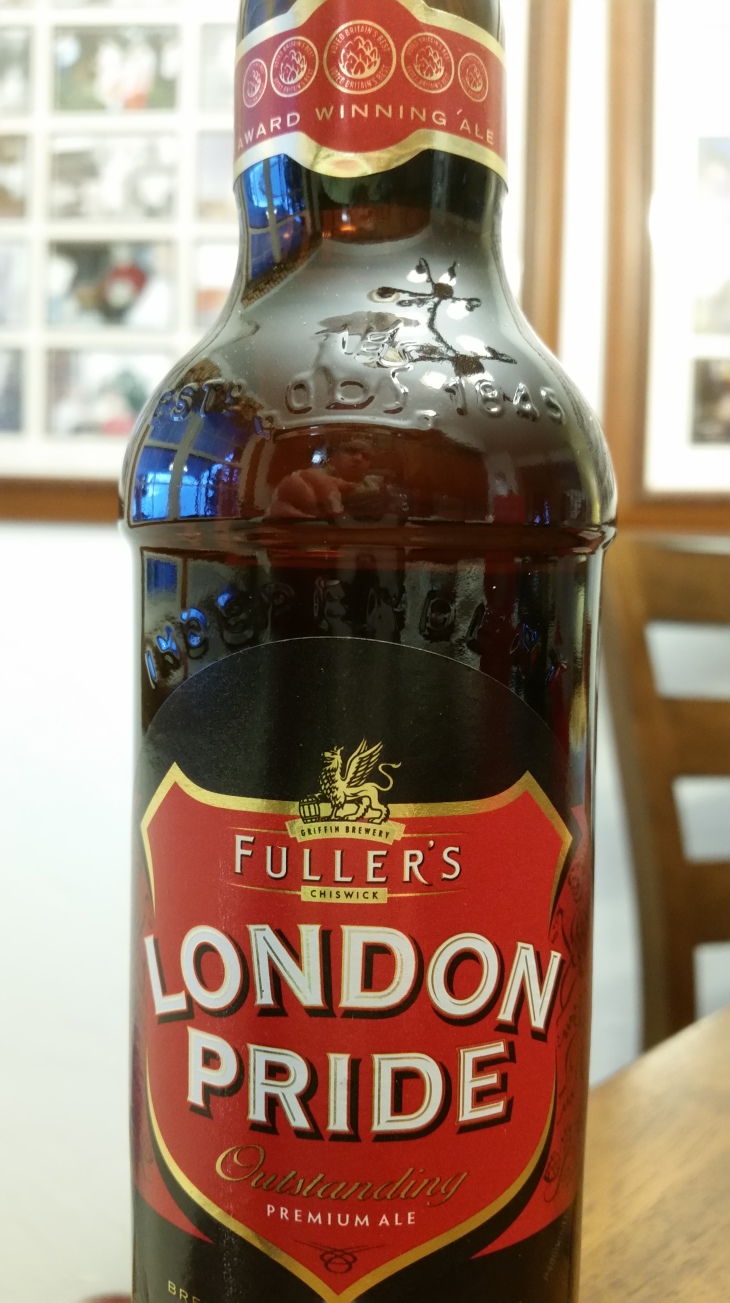 This is the second time in the fast few months these pages have featured a savory pie.  Some of you may recall last October’s King’s Arms Tavern (i.e., Williamsburg) Chicken Pot Pie.  That turned out so well it brought to mind a recipe in the March/April 2017 issue of Cook’s Illustrated for the Virginia pie’s original English inspiration.

Little is more closely associated with England than is beef, and this pot pie offers it in abundance.  When the beef is first cooked it surrenders its juices to create luxurious drippings.  These are combined with beef stock and other ingredients (including the ale!) to create a savory gravy in which the beef cooks, completely re-moisturizing it and infusing it with all sorts of flavor.

Yes, the beef, bacon and mushrooms all play their own distinctly separate savory roles, but the onion’s and garlic’s sharpness keeps the pie from being offputtingly heavy and rich.  The ale’s aforementioned malty character and thyme’s fresh vegetal notes further keep everything in balance.

Though this recipe requires only a cup-and-a-half of beef broth, and a good canned variety would be more than adequate, homemade is even more flavorful, healthy and satisfying.  Last weekend, while the Tamarind Crab was being prepared, an oxtail met a few complimentary ingredients, including a head of garlic, a large shallot, a couple carrots, celery leaves and a sprig of oregano.  Simmered for a few hours then strained and frozen, it will provide homemade beef stock for many future uses, including a Steak and Ale Pie.  Here are the beef stock ingredients, before being submerged and simmered:

There’s something so wonderfully satisfying about being inside, warm and cozy, with a steaming pot pie, while a cold wind rages impotently outside.   Why do you think late October brought chicken pot pie and now, in winter’s frigid February depths, we see its beefy English uncle?

We’ll make it through the cold season, but only if we sustain ourselves with hearty food that warms both the stomach and the spirit.

That, and a little more ale would be helpful too.

For the filling, combine water and baking soda in a large bowl.  Add the beef, salt and pepper and toss to combine.  Preheat oven to 350 degrees.

Stir in beer and remaining beef broth, scraping browned fond from the bottom.  Stir in beef and bring to a simmer, pressing as much beef as possible beneath the surface.  Cover pot tightly with aluminum foil, then cover.  Transfer to oven and cook for an hour.

While filling is cooking, for the crust, set aside two tablespoons of the beaten eggs.  In a bowl whisk together remaining egg and the sour cream.  Use a food processor to combine flour and salt.  Add butter and pulse until pea-sized pieces remain.  Add half sour cream mixture and pulse until combined.

Add remaining sour cream and pulse until a dough begins to form.  Transfer to a lightly-floured counter and knead briefly until dough begins to come together.  Form into a 4-inch disk and wrap in plastic.  Refrigerate for two hours.

After the filling has cooked for an hour, remove lid and discard the foil.  Stir filling, cover again with lid and return to oven.  Continue cooking until beef is tender, about twenty minutes.  Transfer to pie dish(es) to begin cooling.

Roll dough on a lightly-floured counter until it’s about 1/4-inch thick.  Cut pie crust(s) to a diameter 1/2-inch beyond the pie plate(s) being used.  Cut small openings to allow air to escape during baking.  Drape the crust(s) over the pie plate(s) and tuck the edge beneath itself so it’s even with the plate.   Preheat oven to 375 degrees.

Crimp dough tightly around the edges with your fingers, or press with the tines of a fork.  Brush with the reserved beaten egg.   Cook for 25 to 30 minutes, until the crust is deep golden brown and the filling is bubbling.  Let cool for 10 minutes before serving.

1 – Instead, I used a couple large-ish shallots.  Of course.

2 – In keeping with the theme, I chose a good English ale, though any good beer will do, as long as it’s not too dark and bitter or, on the other extreme, a weak watered-down lager.