What better way to initiate a Sunday morning, or any morning for that matter, than with a buttery, flaky breakfast roll slathered in vibrant fruit jelly?  The combination delivers a warm hug of flavors and textures, with the jelly’s fruity sweetness served up on a pillow of fluffy, yeasty richness.  Achieving such perfection requires considerable preparation.  Not complicated, but greedy of time, and involving considerable waiting between steps.

These are Fritz’s Sunday Morning Crescents, as they appear in a favorite novel, The Golden Spiders, and as published subsequently in The Nero Wolfe Cookbook.   In the canon, Fritz Brenner is a supremely talented cook serving the series’ titular protagonist, Nero Wolfe.  Fritz creates these breakfast rolls, among countless other culinary delights, leading the narrator to comment that anyone who tries these crescents, is hooked.  Forever and hopelessly.

It’s easy to imagine why.  After all, over half a pound of butter makes just six rolls.  The result is wonderfully flaky and savory, a perfect host for a sweet, tangy jelly.  Pictured above are a good peach jam, as well as what was left of the guava preserves first used a little while ago.

However, each recipe also takes half a cake of yeast, imparting an earthiness and a chewiness almost reminiscent of standard bread.  In fact, despite being called “breakfast” rolls, these crescents also make superlative sandwiches, a point the picture below illustrates: 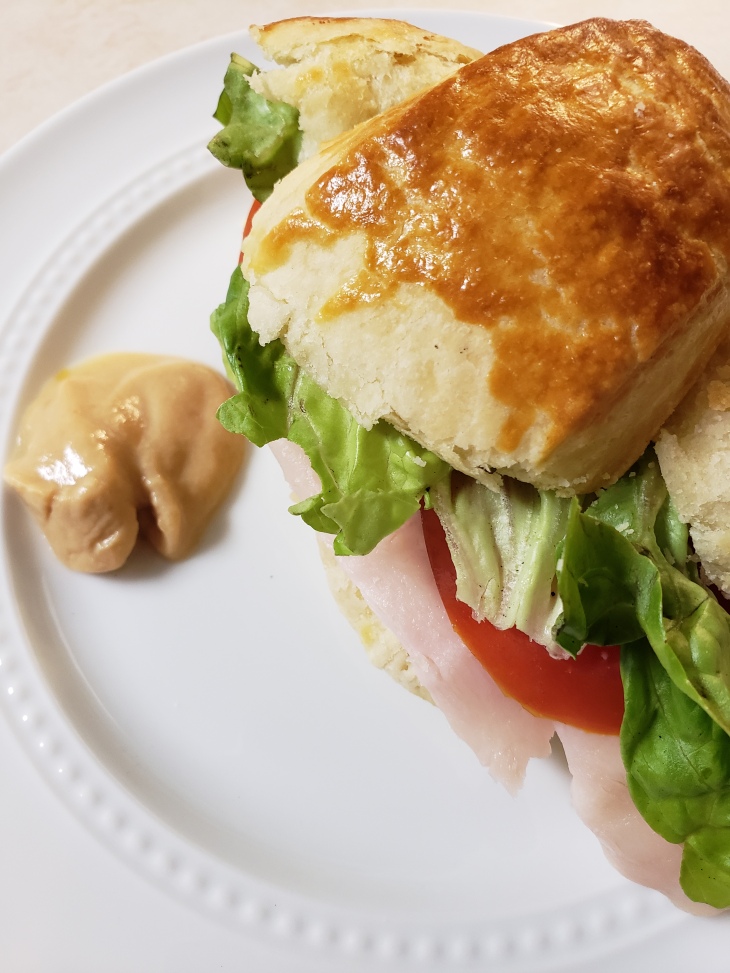 No matter whether you enjoy these crescents for breakfast, for lunch, or for both, allow sufficient time to prepare them.  As with croissants, the dough is rolled out, layered with butter, then is folded in on itself and left to chill in the refrigerator.  This entire process is repeated at least three more times and, in fact, takes hours.

While neither the novel nor the cookbook covers this detail, it’s likely Fritz prepares these Saturday, then keeps them in the refrigerator, covered and uncooked, before baking them Sunday morning.  Just one bite makes everything  worth all the time it takes, and then some.  Even if “Saturday Afternoon Crescents” lacks a certain lyrical poetry.

Heat the milk in a saucepan, but cut the heat as soon as a froth forms (and certainly, don’t let it boil!).  Add the melted butter, sugar and salt and pour into a large bowl to cool.

Meanwhile, pour the water over the yeast and allow it to soften.  After a few minutes, pour the softened yeast into the cooled milk mixture, stirring it well.  Add the flour and egg and stir until a soft dough forms.  Turn out onto a lightly floured surface and knead for a few minutes.  Place the dough in a greased bowl, cover, and put it in a warm place until it doubles in size, about 45 minutes.  Punch down the dough and refrigerate, covered, for an hour.

Punch down the dough again and place it on a lightly-floured surface.  Roll it out to form a rectangle, about 1/4-inch thick and six inches by eighteen inches.  Flatten the cold butter and place on the dough, leaving about an inch of uncovered dough on all sides. (*2)  Fold the dough into thirds, as you would a letter, right side over left.  Press together the ends to seal in the butter.  Roll into another 6″ x 18″ rectangle and fold into thirds again.  Chill for 30 minutes.

Repeat the process at least three more times, until the butter is thoroughly incorporated into the dough.  Before rolling out the dough for the last time, let it chill for 90 minutes.

Roll out the dough on a lightly-floured surface and form into the 6″ x 18″ rectangle.  Cut the rectangle into thirds, creating three six-inch squares.  Cut each of these from corner to corner, producing two triangles.  You should have six triangles when finished.  Roll each triangle, starting with the wide end, and keeping the “point” as centered as possible.  Curve the ends to form a crescent shape and place on an ungreased cookie sheet.

Preheat the oven to 400 degrees and beat  together the egg yolks and the cream.  Brush each crescent with the mixture.  Bake at 400 degrees for 5 minutes, reduce heat to 350 degree and bake for fifteen more minutes, until golden-brown.

1 – Dry yeast would work just as well, and half a cake of the “wet” variety is about the same as one packet of the dry.  If you use dry yeast, still soak it in the warm water before adding it to the milk.

2 – Sadly, I must gainsay Rex Stout, the people at Viking and, above all, Fritz, by showing you a better way.  Cold butter is difficult to flatten, particularly with any degree of precision.  It’s better to cut each stick into about twenty slices, and then to space each of these evenly over the dough’s surface.  Butter that’s slightly softened might be easier to flatten, but that won’t work because the idea is too keep the butter as cold as possible.  The colder the butter, the flakier the roll.  Cutting the butter into slices keeps it cold and allows for accuracy.