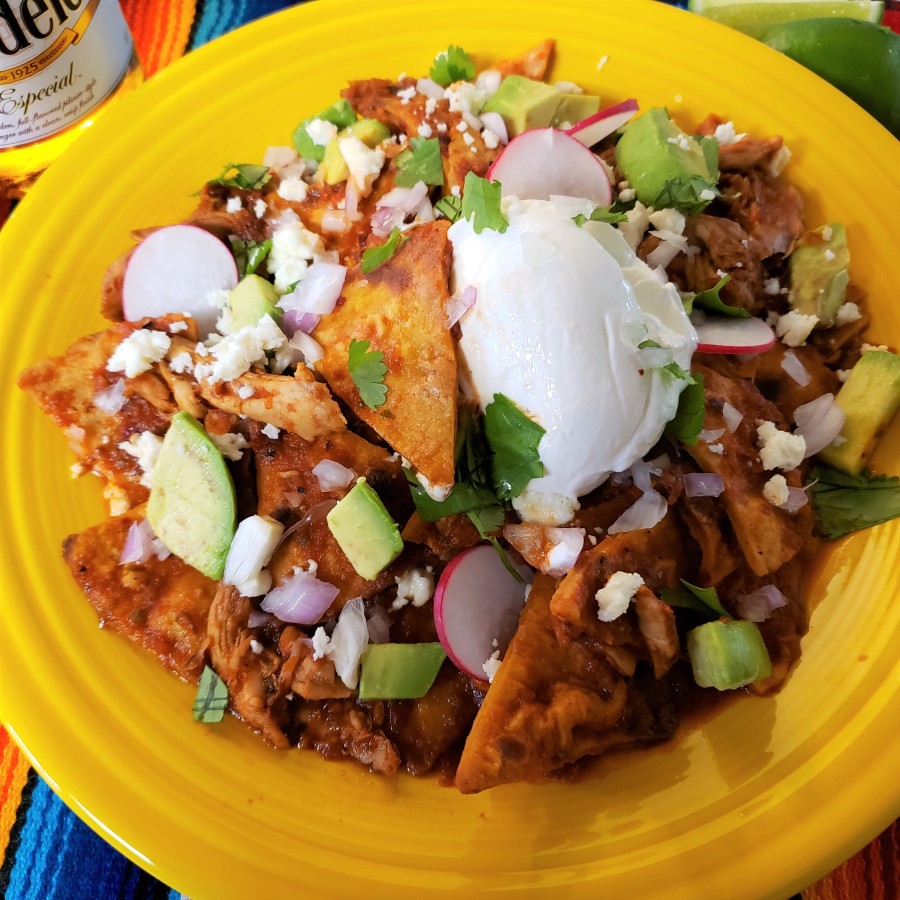 What if you took chips and salsa, a combination so pedestrian and somewhat inauthentic Taco Bell has a version, and gave it major enhancements, taking care to make everything from scratch, down to pulling your own tortilla chips from the oven?  Then you’d have chilaquiles, a flavorful and satisfying dish much more likely to be made in kitchens in Mexico, and anywhere else those of Mexican descent have settled.

Not that the New England WASPs who put together the masterful Cook’s Country Cookbook qualify anything as being “authentic,” but they make a brave attempt at it, as does this journal.  Chicken Chilaquiles is the result, and gives the humble tortilla chip a flavorful range of tastes and textures, maximizing its experience.

Start with homemade chips, a prospect less intimidating than it sounds.  Just cut corn tortillas into wedges, spritz them with olive oil, sprinkle them with sea salt, and bake them, and you get this: 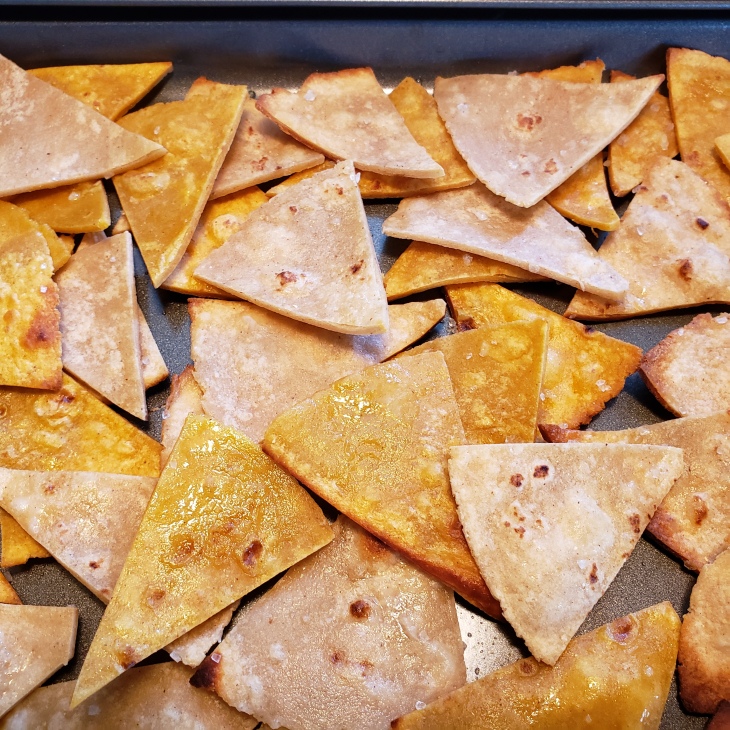 Next comes the spicy tomato sauce which infuses the chicken, and ultimately the chips, with flavor.  It takes on great character and vigor by using three different chiles: 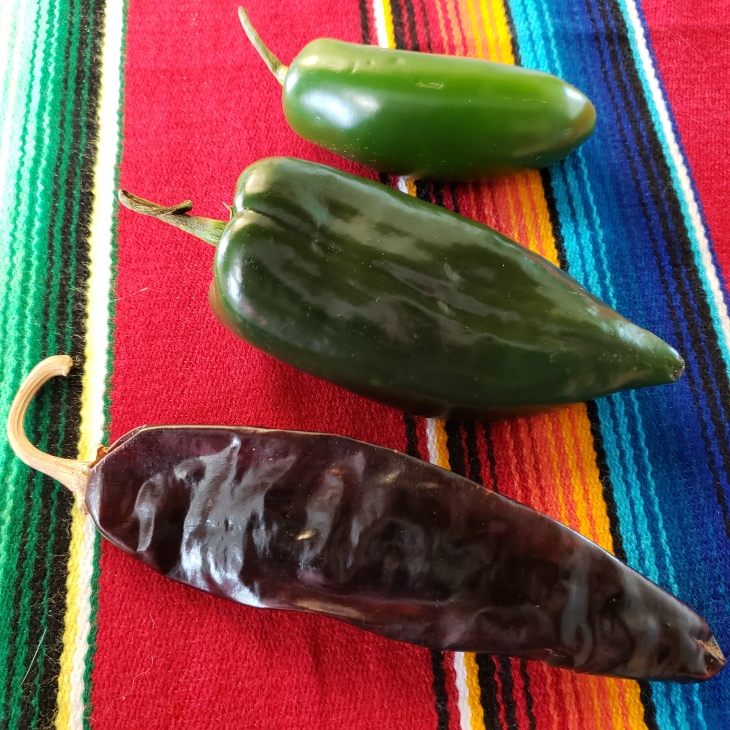 Moving from front to back of shot, are the guajillo, poblano and jalapeño.  All three are pulverized in a blender, along with tomatoes, cilantro, onions, garlic and other spices.  The sauce is blended until smooth and is poured into a stockpot to simmer with the chicken. Toward the end, the homemade chips are stirred into the pot to simmer for a minute or so only, which is long enough for the chips to absorb all that flavor.  It softens them just a bit, while allowing them to retain their shape and integrity.

Plate it, then the real show starts, as the pepper-laced chips and chicken are garnished with diced avocados, sliced radishes, cilantro and crumbled queso fresco.   Topping it all, figuratively and literally, is a generous dollop of sour cream,  These toppings complement the spicy chicken and still-textured chips with a creamy and, at times, cooling afternote.  It’s a perfect combination.

This might be chips and salsa of a sort, but it’s all grown up now and ready to go out on the town.  It returns a fast-food snack to its roots and makes it into a satisfying meal worthy of service at a dinner party.  The intervening years have been quite kind, haven’t they?

Remove one of the racks from the oven and place the other two at the lower-middle and upper-middle positions.  Preheat the oven to 425°.

Divide the tortillas evenly between two rimmed baking sheets.  Toss each with half the olive oil, and sprinkle with salt.  Cook for 15 to 20 minutes, until golden-brown and crisp, making sure to stir the chips a few times throughout.  Set aside to cool.

Place a stockpot over a medium flame, then put the guajillo chiles in the pot.  Toast them until fragrant and slightly darkened, about five minutes.  Place toasted guajillos in a blender and pulse until reduced to a powder, about 90 seconds.

To the same blender add the tomatoes with their juices, 3/4 of the onions, the poblano and jalapeño chiles, the cilantro sprigs, garlic and 3/4 teaspoon of salt.  Process until quite smooth, about 90 seconds.  Pour sauce back into the stockpot and add the chicken broth.

Set the flame beneath the pot to medium-high and bring to a boil, stirring frequently.  When sauce boils, add the chicken, then reduce the flame to low.  Simmer uncovered for 20 minutes.

Using tongs, transfer the chicken to a cutting board and increase the flame to medium and continue to simmer, stirring occasionally, until the sauce reduces to four-and-a-half cups..  While the sauce simmers, use two forks to shred the chicken.  Return the chicken to the sauce and cook until warmed through, about two minutes.

Add the chips to the sauce and toss to coat.  Turn off flame and allow chips to sit, depending on desired crispness, anywhere from two to five minutes. (*4)

1 – Can you imagine what I’ll suggest?  Two large shallots will do the job.

2 – No need to make any of the chopped vegetables “pretty,” as all are bound for the blender.  In other words, a rough chop is fine.

3 – Instead, try a similar quantity of boneless, skinless thighs.  Not only are they much more flavorful and juicy, but once the skin is gone, they have roughly the same fat content as do breasts.

4 – It’s up to you, but I’d recommend as brief a stay in the pot as possible, in other words, a couple minutes.  This will leave the chips soft, but still a little crispy.  The longer they stay in the pot the soggier they’ll get, without a corresponding increase in flavor.

If that’s your aim, fine.  Let them sit.  If you prefer something a little more textured, though, two minutes will be sufficient.

10 thoughts on “All Dressed Up”