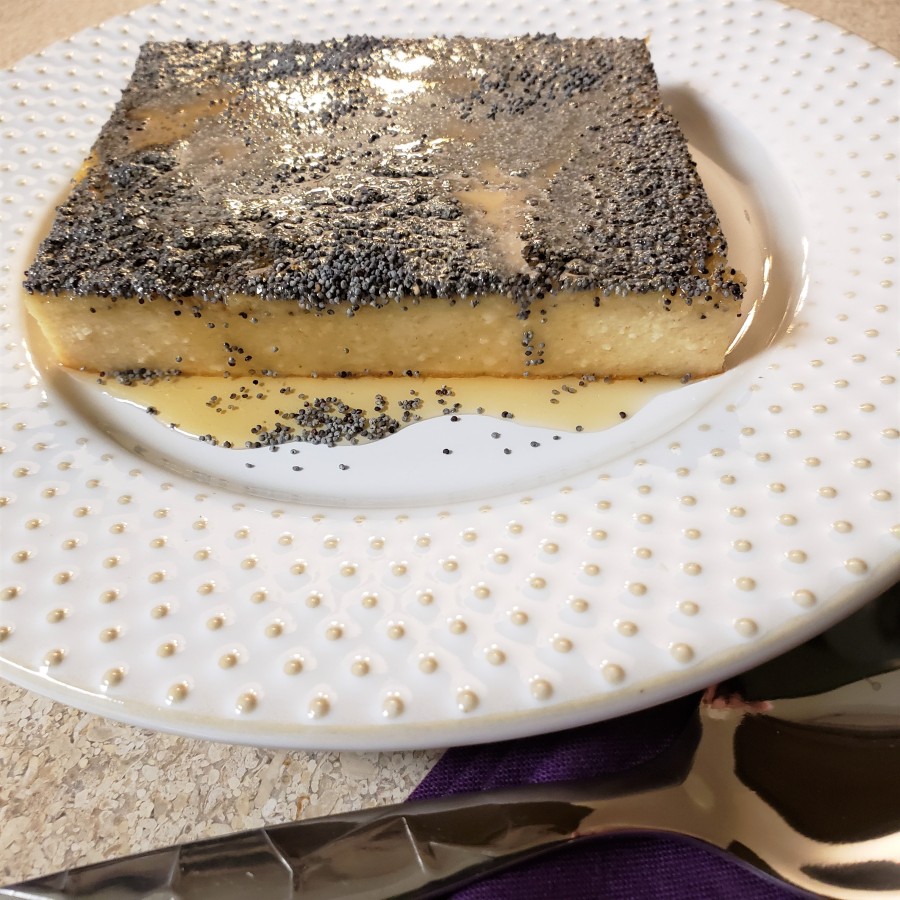 Gliding through the millennia, we find ancient Romans enjoying savillum, a dessert that’s wended its way to us as cheesecake.  No less a personage than Senator and historian Marcus Porcius Cato (better known as Cato the Elder) provided instructions, 160 BC, in his De Agri Cultura:

See that you cook it well in the middle, where it is the highest.  When it is cooked, remove the pan, spread with honey, sprinkle with poppy, put it back beneath the testo for a moment, then remove.  Serve it thus with a plate and spoon.

(Explanations follow at the bottom of this page, in the “Notes” section.)

As sugar was uncommon in ancient times, and was used mainly as medicine, Roman cooks made full use of honey, the original sweetener.  This is more than adequate for the purpose, and it gives the savillum a nice smooth texture.  In fact, it’s remarkably silky even before it’s cooked.  Here’s the just-mixed batter:

After it’s cooked and the cake sets, it’s topped with a mixture of poppy seeds and honey, then is allowed to cool a bit before serving.  The topping provides a sweet, slightly crunchy crust that anticipates the graham cracker crust that would develop many centuries later.

The original savillum likely was somewhat thin, as is today’s preparation.  Over the centuries, the cake thickened and became the cheesecake we recognize today.  There’s no reason not to enjoy the best of both worlds – original ingredients and modern form – thus, the recipe below has been modified accordingly.  Specifically, it’s cooked in a square pan, instead of a longer rectangular vessel, making the savillum prepared as below twice as high as what’s in the photo, and increasing the cooking time in tandem.

Much credit goes to the New Varangian Guard, an Australian organization that converted Cato’s instructions into a format more amenable to modern cooking.  If you recall, the NVG also provided recipes for the Byzantine feast this journal featured a couple years ago.

Note the purple napkin in today’s picture.  That’s Imperial Purple.  Perhaps cooks in the Emperor’s kitchens a century or so after De Agri Cultura read their Cato and followed the instructions they found.  In which case, a happy Augustus awaits his savillum.  No wonder the Roman Empire lasted, in various forms, for another 1,500 years.

(Cheesecake, as per Ancient Rome)

Preheat the oven to 350°.  In a large bowl, use a rubber spatula to mix the two cheeses until there are no large lumps.  Sift in the flour, then add the eggs and honey.  Whisk until smooth.

Lightly spritz a 9-inch square baking pan with cooking spray, then pour in the batter.  Cook for 40 minutes, until the top is lightly browned and the cheese sets.

About five minutes before the savillum is baked, put the honey for the topping and the poppy seeds in a small saucepan.  Place the saucepan over a low flame and cook, stirring frequently, until the mixture begins to boil.  Turn off flame.

Remove the savillum from the oven (but leave the oven on!).  Drizzle the topping over the surface, using a rubber spatula to promote even coverage.  Put the baking pan back in the oven and cook for four minutes more.

Let cool on a wire rack for 20 minutes (longer if you don’t want it to be as warm), then cut and serve.

1 – A libra is the ancient Roman pound, and is equivalent to about 10 ounces.

2 – Libum is a cheesecake much more savory than is savillum.  Its closest modern counterpart is the quiche.

3 – Effectively, a testo is a lid.  From antiquity up through at least the 18th century, a favored cooking method was to place the food in a vessel with a tight-fitting lid, then to nestle it among hot embers, often shoveling a few glowing coals atop the lid too.  Of course, with the advent of enclosed ovens in the 1800s, the ancient method of cooking among embers disappeared from kitchens, along with fireplaces.

4 – AP flour is fine as well, though whole wheat flour is much closer to what would have been used in ancient Rome.

5 – As you can see, 3 tablespoons of poppy seeds covers the cake in a solid layer.  Not an issue for me, as I like poppy seeds, but adjust the quantity to your liking.

14 thoughts on “It Began Here”