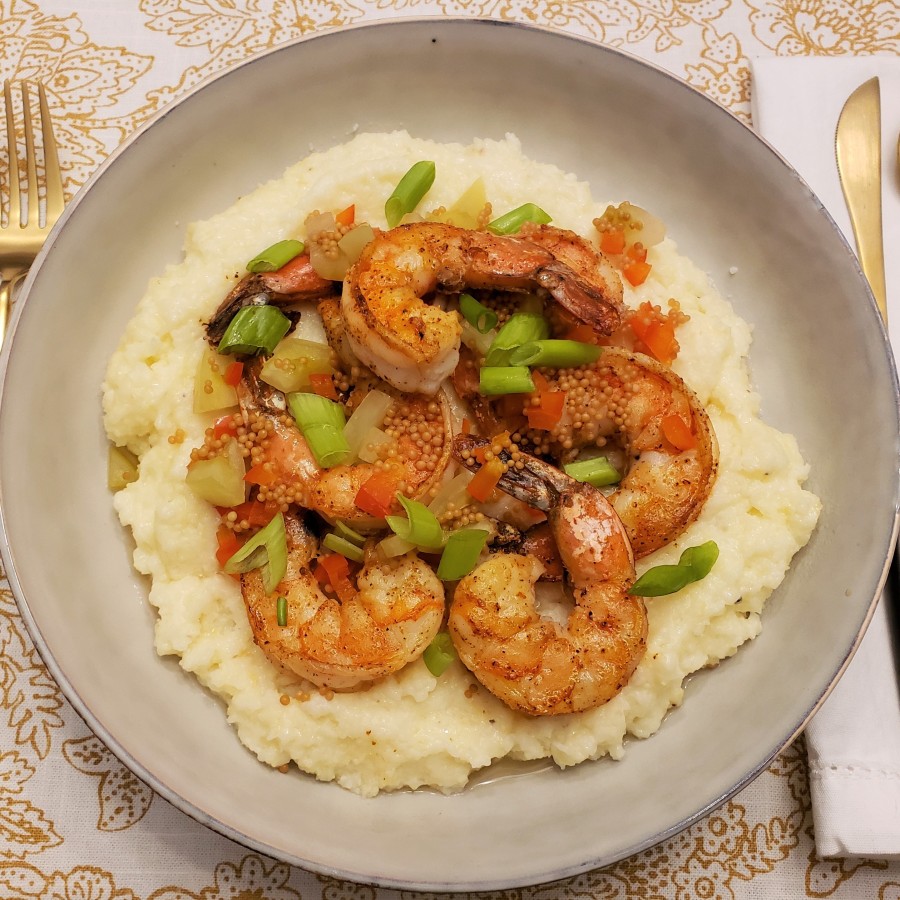 Once before we visited New Orleans for shrimp (remember the Shrimp Creole from a couple autumns ago?), but today’s offering takes the shellfish in an entirely different direction. Specifically, Southern American Low Country (Charleston, Savannah, etc.), as done up in Louisiana and served as Shrimp and Grits with Mustard Seed Chowchow.

This is a recipe chef Isaac Toups developed for his New Orleans restaurant, and which Food & Wine featured in the March 2019 issue. Not only is the preparation a new experience, as is nearly everything found on these pages, but it also was the very first time for grits.  Many relatives and other acquaintances are sprinkled throughout the South, but they’re all Yankee transplants, and grits remained even more obscure than okra.

Then came the discovery.  Who knew grits are so amazing?  (Well, to begin, Southerners.)  No doubt, cultural chauvinism motivated much of the ignorance, as grits are similar to polenta, which, despite its origins in ancient Rome, is much more familiar to Northern cooks.  Of course, grits benefit from a stick of butter and really, what wouldn’t?  The result is warmly smooth and is creamy with fleeting hints of nuttiness.

A beautiful canvass from which the shrimp springs.  Yes, the motion implied is intentional, as a dry rub of Cajun spices prepares the fish for a flavor explosion when the moment arrives.   Not quite as “hot” as it is, well, spirited, the pan sear both deepens and broadens the spices’ profile.  Nice contrast with the sweet shrimp found within.

Finally comes the chowchow.  Another novel endeavor, but really, it’s just fancy Southern relish.  No pickles, but vinegar is present, as are mustard seeds, simmered long enough to soften them.  Add a diced green tomato and a minced bell pepper and you have a playful mixture that dances with the shrimp and adds sparkle to the grits.

Many in Dixie enjoy shrimp and grits for breakfast, though a Northerner likely will make a dinner of it.  Though it certainly would be worth a trip to The Big Easy to try it for the morning meal.  Laissez les bons temps rouler, and all.

Preheat the oven to 200°.  In a medium bowl, toss together the shrimp and Cajun seasoning.  Cover and refrigerate.

Place the milk and 1/4 cup of the butter in a medium saucepan.  Place over a medium flame and, stirring occasionally, bring to a vigorous simmer.  Gradually pour in the grits, whisking constantly.  Reduce flame to low and continue whisking constantly until the mixture thickens slightly, about eight minutes.

Cover saucepan and transfer to the preheated oven.  Bake for 90 minutes, until the grits are tender.

Meanwhile, make the chowchow.  In a small saucepan stir together the vinegar, 3/4 cup water, sugar and 1 and 1/4 teaspoons of salt.  Place pan over a high flame and bring contents to a boil.  Stir in the mustard seeds.  Reduce flame to medium-low and, stirring occasionally, simmer for 35 minutes, until the seeds are tender.

Add tomato and bell pepper.  Continue simmering, stirring occasionally, until the mixture has thickened a bit, about 15 minutes.  Remove from heat.

When the grits ae tender from cooking, remove from the oven and stir in two teaspoons of salt and the remaining 1/4 cup of butter.  Replace the cover to keep the grits warm until you’re ready for them.

Remove the shrimp from the refrigerator.  Place a cast-iron skillet over a high flame, then pour in the olive oil.  When the oil just begins to smoke, add the shrimp in a single layer.  Cook until opaque and lightly charred, about 90 seconds per side.

To serve, divide the grits evenly among four bowls, then distribute the shrimp among them.  Pour some of the chowchow over each, garnish with sliced scallions and serve.

1 – Not to go all product-placement, but Tony Chachere’s is the best.

2 – If you can’t find a green tomato, don’t despair.  My local market surprised me by carrying them, north of the Mason-Dixon line, but an unripe medium tomato (rejoice, as market shelves groan with unripe tomatoes this time of year) with a few drops of lemon juice tastes much the same.