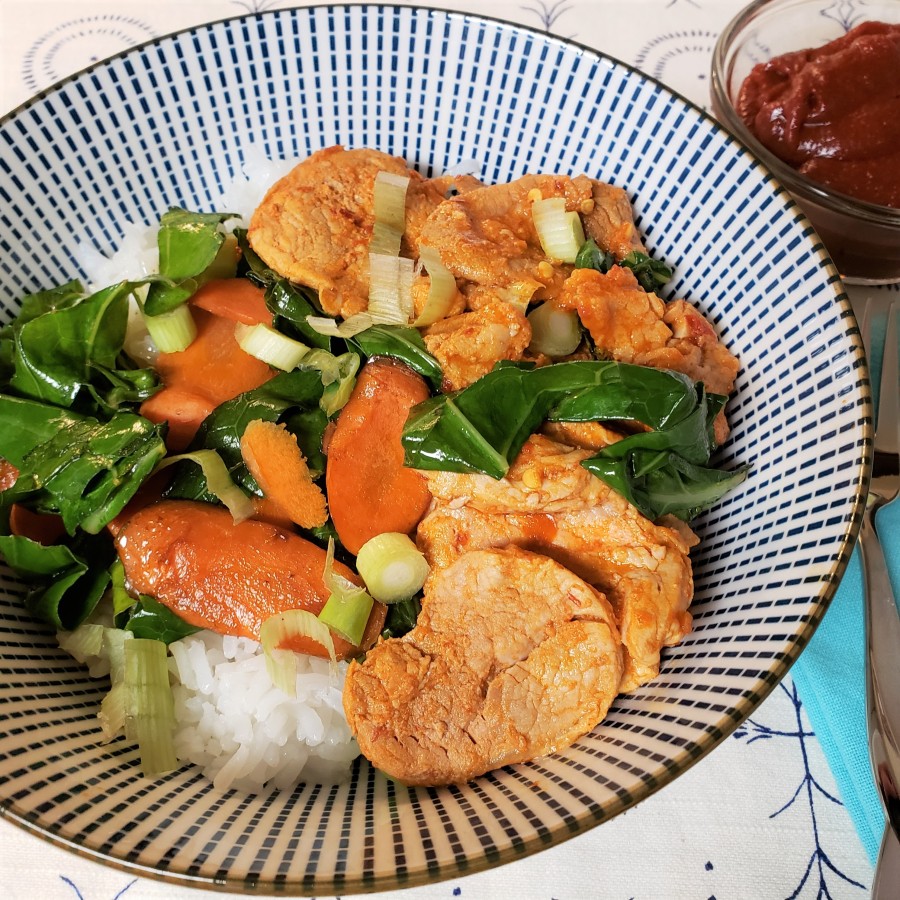 Today’s entry supplies it too, with a pair of warmers.  Indonesia’s cooks contribute the sambal, while Korea’s kitchens produce gochujang, a fermented bean-pepper paste served alongside the main course.  While the flavors span different parts of the continent, both impart a vigor that gently stimulates the palate and satisfies the spirit.  They definitely give this a dish an Asian feel.

At least one reader isn’t a fan of spiciness, an inclination this journal shares, surprisingly perhaps.  While sambal by itself definitely has some fire, as one ingredient among many in the marinade, it becomes a cheerleader, inspiring the other flavors.  The pepper informed both sauces, but the other ingredients tame them, thanks to the recipe Bon Appétit shared in its May 2019 issue.

Specifically, these are Spicy Pork Bowls with Greens, though “Flavorful” would be more apt an adjective.  There’s some heat, certainly, enough to add a crackling tingle to January’s cold plainness, but the greens, carrots and rice sooth them and the pork’s earthiness benefits from a little motion.  Plus, the peppers tenderize the meat, an impressive feat when working with pork.

Overall, the preparation carries a strong Korean influence, down to the choice of gochujang to accompany. While sambal makes the marinade, that’s the extent of Indonesia’s influence, as pork is unthinkable among the country’s Muslim majority, relaxed though it generally is.  Koreans have no such restriction, and their cuisine celebrates the pig, as do most other (non-Muslim) East Asians’.

The tenderness is released when the pork is sliced thinly, which is much easier when the tenderloin is partially frozen just prior to cutting.  A half hour in the freezer will do the trick, resulting in a surface that’s temporarily semi-solid and thus, is much more cooperative.  By the time it goes into the marinade, it’s thawed, ready to soak up all that flavor.

Speaking of thawing, such is definitely is desirable in winter’s depths, as spring, once remote, plots its return.  Until then, warmth is welcome, and Spicy Pork Bowls provide it two ways.  Plus, those colors just put one in mind of birds serenading spring, don’t they?

Put tenderloin in the freezer for 30 to 45 minutes, until the outside is somewhat (but not completely!) hard.

In a large zip-top bag, combine the sambal, the brown sugar, ginger, garlic and two tablespoons each of the soy sauce and sesame oil.

Using a long knife, thinly cut the pork crosswise, into as many slices as is practical. (*4) Add the pork to the marinade, force out as much air as you can, then seal the top.  “Knead” the meat to maximize its exposure to the marinade, then let it sit at room temperature for at least 10 minutes, up to 2 hours.

After the meat is ready, set a large skillet (*5) over a medium-high flame and pour in a tablespoon of the vegetable oil.  When the oil shimmers, place half the pork in a single layer along the bottom and salt lightly.  Cook undisturbed for a minute, until the bottom begins to brown.  Flip the meat and cook the other side for a minute.  Transfer meat to separate plate, add up one tablespoon more of oil, if needed, (*6) and repeat with the rest of the pork.

Remove the skillet from the flame and carefully wipe out the pan.  Return skillet to the flame and add the last tablespoon of the vegetable oil.  Add the carrots in a single layer and cook undisturbed for a couple minutes.  Add the collard greens and stir to combine.  Continue cooking, stirring frequently, for another two minutes, until the greens brighten.  Turn off flame.

In a small bowl combine the vinegar with the last tablespoon of soy sauce and the remaining 1/4 teaspoon of sesame oil.

Divide the rice among four serving bowls.  Drizzle each with the sauce you just created.  Add a bit of the pork and some of the vegetables.  Sprinkle with scallions and serve with the gochujang, if desired for dipping.

1 – An admission – I don’t peel ginger when it’s destined for a marinade.  Sometimes too when it’s used directly in the dish.  If the ginger is fresh, the peel is soft, thin and is indistinguishable from the rest of the root.  Plus, it saves effort.  I’m lazy that way.

2  – If you can’t find collards (some markets don’t carry them), substitute Tuscan kale.  You know, the kind with relatively smooth edges.

4 – Which works out to 1/4-inch slices.  You can go thinner, of course, but the tenderloin will thaw long before you reach the end (unless, that is, you have sushi-chef knife skills).  The more the pork thaws, the more troublesome it is.  Quarter-inch slices will be tender, and they’ll save you a lot of cursing.

5 -Usually, I prefer a wok for Asian cuisine, but in this case something with a flat bottom works better.

6 – I found adding the oil to be unnecessary, as the fat the previous pork rendered will be more than sufficient.