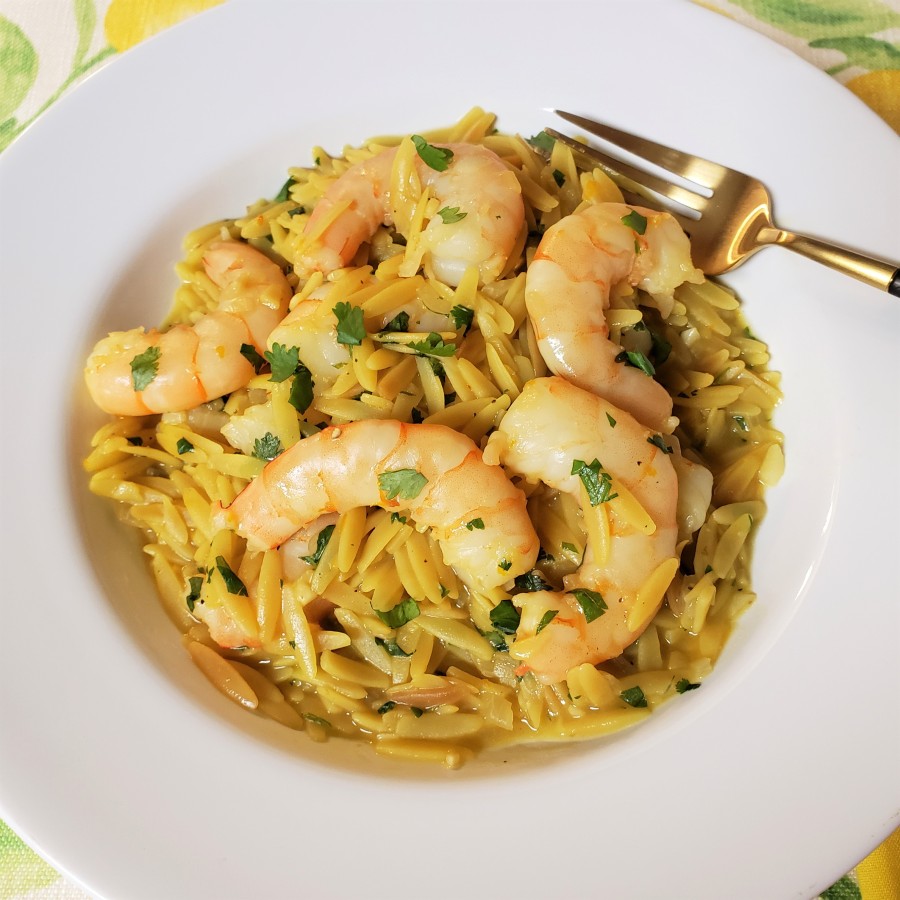 Before you is risotto.  Looks about right, especially with the shrimp.  Smells good too, as there’s a faint trace of lemony freshness.  Risotto is made with rice, right?  Maybe it is, usually, but in this case, the grain of choice is a pasta, orzo.  The pasta even looks like rice, it’s cooked al dente, just like a good rice is, but the orzo is an option a bit more substantive for winter, which really contrasts nicely with the lightness the shrimp and lemon impart.

When Cook’s Country included the recipe in late summer (August/September) 2019, thoughts of the approaching chill turned to coziness, and this preparation properly puts one in mind of that bliss.  It doesn’t hurt that the risotto is served steaming-hot, directly from the stovetop. Or that the orzo tenderizes in a quart of chicken stock (homemade, if you please), and it absorbs all that savory warmth.

Beautiful, and this cookpot meal is just what’s needed to insulate from even the iciest blizzards, but also present are tantalizing memories of last summer’s glistening greenery.  Or is it a foretaste of spring’s resurgence in a couple months?  Doesn’t matter, because the lemon provides a subtle sparkle of the brightness that sustained us once, and will again.

Moreover, cilantro garnishes the dish, which means one of the first things the diner sees, and tastes, is a touch of leafy greenness.  Even the name, Shrimp and Orzo Risotto with Saffron and Lemon, inspires warm thoughts to go along with the warm stomach.  Frigidness doesn’t stand a chance.

As for the protein, the shrimp does a good job celebrating both coziness and anticipation.  Sure, seafood brings the sea to mind (wow, really?), and shrimp delivers a clean, almost sweet, succulence.  Still, being in a pot with boiling broth and sautéed shallots gives the shellfish a glow that snuggles one in cashmere.

Lots of complexity here.  There’s the pasta that looks like rice, of course, but this meal has one more twist.  As the orzo slips into the warm bath at the start, a generous pinch of saffron goes into the pot too.  As the threads bloom, they infuse everything with a cheerful yellowness.  That’s the best transformation of all, making up a plate of savory sunshine.  For late January, brilliant.

Shrimp and Orzo Risotto with Saffron and Lemon

Stir in the broth, 1 and 1/4 teaspoons of the salt, 1/4 teaspoon of the pepper and saffron.  Bring to a boil.  Reduce flame to medium-low, cover pot and simmer, stirring occasionally, until the orzo is just tender, about 20 minutes.

Sprinkle the shrimp with the remaining 1/4 teaspoons (each) of the salt and pepper.  Stir the shrimp into the risotto and cover.  Cook until the shrimp are just opaque, about five minutes.  Off the heat, stir in the parsley, lemon zest and lemon juice, and serve.

2 – The intro says it all – if you can make homemade broth, it’s so much better.  Entirely worth the initial investment in time, as pretty soon you’ll have a freezer full of golden excellence.

That’s Point #1.  Ready for a lecture?  As most of you weren’t around for the Vietnamese Crab and Asparagus Soup five years ago, I’m going to start again from the beginning…

3 – Parsley’s a possibility, but smart cooks, or those with taste buds, use cilantro instead.  Of course, if bitterness is your thing, fine, use parsley.

40 thoughts on “Master of Disguise”